Operation Worship® is currently raising the funds to print and ship 100,000 Bibles to Military Chaplains throughout the US. These new Bibles have already been spoken for but we are relying on God’s great provisions for the funding. As a thank you for single donations, $500 or larger, we will send a limited, serialized Operation Worship® Collector Challenge Coin along with certificate of authenticity. Would you prayerfully consider helping us to change souls for Christ through the distribution of God’s Holy Word to our brave military men and women. The Bible is crucial.
Why A Coin?

WHY A CHALLENGE COIN?

Challenge Coins are highly coveted in the Military. They are given only to unit members or highly esteemed guests during visits or important engagements, usually in the form of a handshake. Operation Worship® has been the honored recipient of some challenge coins. Nothing makes us feel more welcomed and grateful when we serve. We wanted to be able to return that same feeling when you contribute to Operation Worship®.

Get A Challenge Coin
Learn More

WHAT IS A CHALLENGE COIN?

A challenge coin is a small coin or medallion, bearing a unit’s insignia or emblem and carried by the unit’s members. Traditionally, they are given to prove membership when challenged and to enhance morale. In addition, they are also collected by military service members. In practice, challenge coins are normally presented by unit commanders in recognition of special achievement by a member of the unit. They are also exchanged in recognition of visits.

The tradition of a challenge is the most common way to ensure that members are carrying their unit’s coin. The rules of a challenge are not always formalized for a unit, and may vary between units. The challenge only applies to those members that have been given a coin formally by their unit. This may lead to some controversy when challenges are initiated between members of different organizations and is not recommended. The tradition of the coin challenge is meant to be a source of morale in a unit, and forcing the challenge can cause a reverse effect. The act of challenging is called a “Coin Check” and is usually loudly announced.

While most holders of challenge coins usually carry them in their pockets or in some other readily accessible place on their persons, most versions of the rules permit a challenged person “a step and a reach” or if an individual has an extra coin to pass it off to the person closest to him or her. Coins on belt buckles or key chains are not acceptable for meeting a challenge. However, a coin worn around the neck is acceptable for meeting a coin challenge.

Traditionally, the presentation of a coin is passed during a handshake. Some units provide strict time limits to respond to a challenge. Traditionally, rules of a challenge include a prohibition against defacing the coin, especially if it makes it easier to carry at all times. If the challenge coin is attached to a belt buckle or key ring, or has had a hole drilled in it to attach to a lanyard, it no longer qualifies as a challenge coin. A safer place to carry the coin is in a pouch worn around the neck.

The Operation Worship Limited Edition Challenge Coin is provided as a “Thank you” to gracious donors who support this ministry and to Chaplains and Commanders in recognition of their faithful service to our brave men and women who serve in the Military. Challenge Coins are considered Highly Collectable within the military. 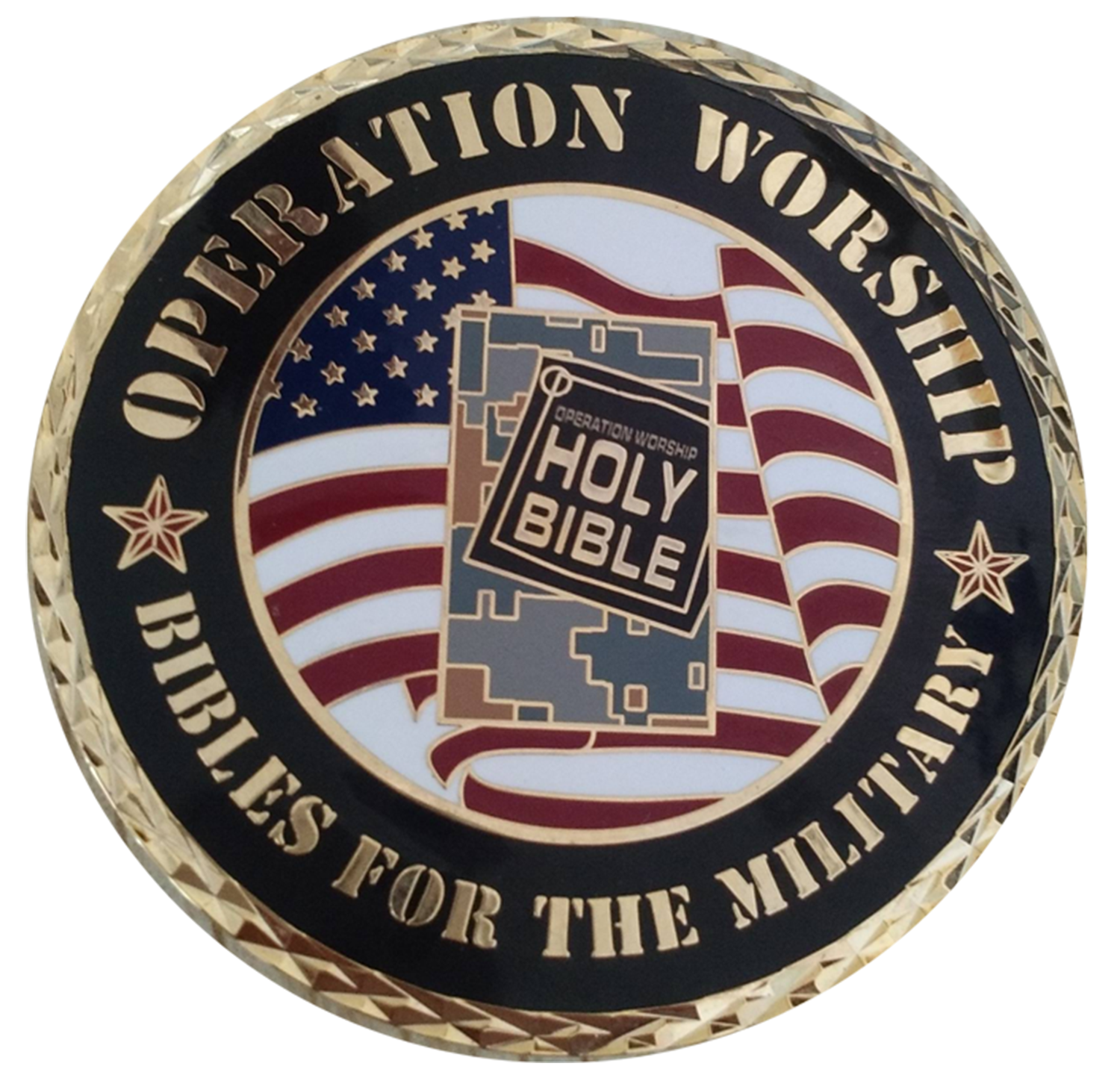 The front side of the coin bears The Holy Bible atop the American Flag. Around the top edge is written, ” Operation Worship” and “Bibles for the Military” separated by Military stars. 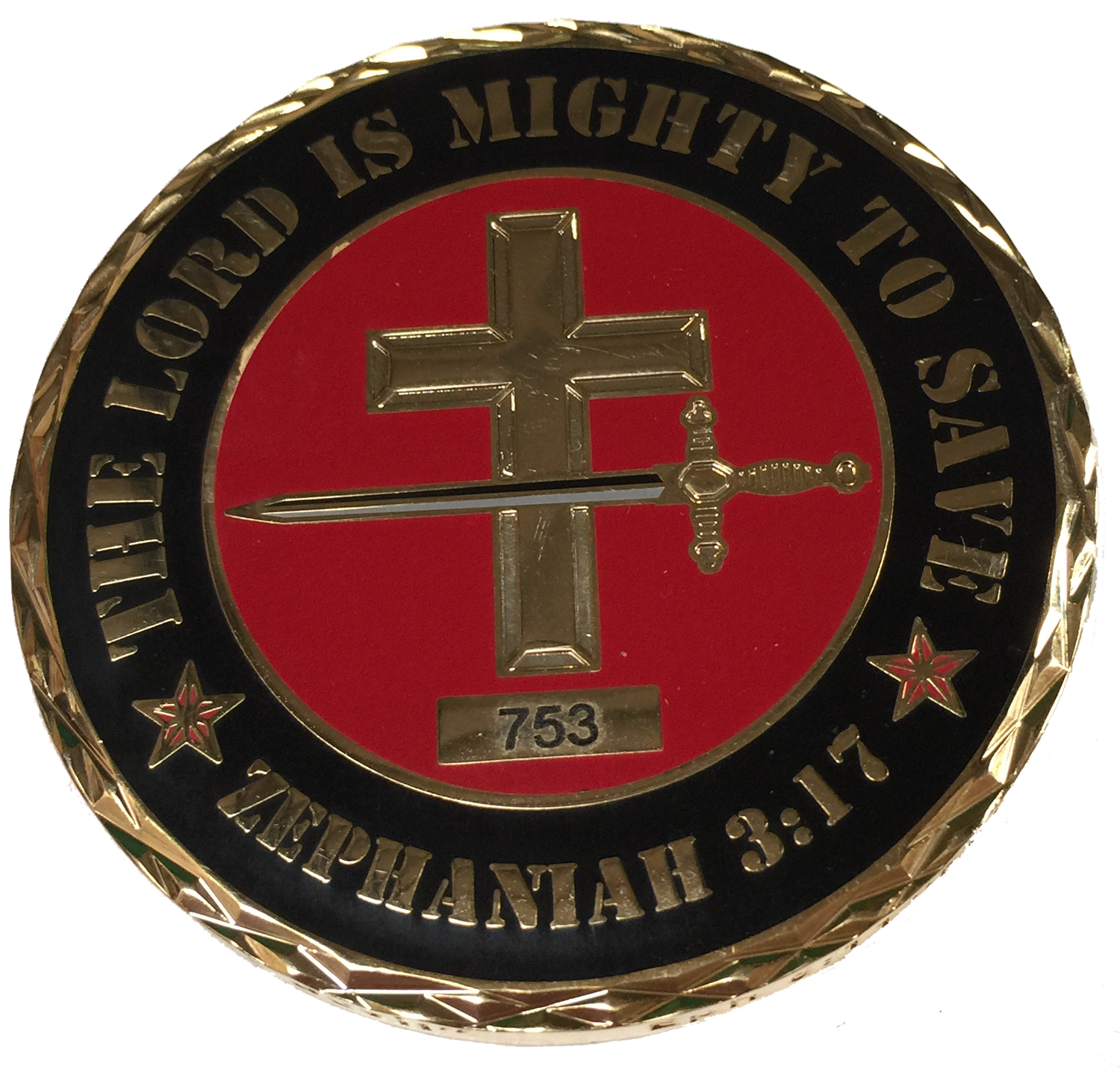 On the rear, you’ll find the sword of the spirit on top of the cross. This symbolizes fighting through love. You’ll also find your serial number and the statement, “The Lord is Mighty to Save” from Zephaniah 3:17.

On the side edge of the coin is inscribed, “Therefore, put on every piece of God’s armor so you will be able to resist the enemy in the time of evil.”.

We only have a limited number of coins to give away. Each is individually serialized with a unique number and are accompanied by a certificate of authenticity. All of this is our way of saying thank you for helping to spread God’s word to those in our Military who desire to understand Him greater. May God Bless you and protect you for your faithfulness to Him.
Donate Now!

Donations of $500 or more will receive a limited edition Operation Worship® challenge coin. All donations will go towards the printing of 100,000 Bibles so we can fulfill our current requests. Thank you!

Note: Only donations of $500 or more will receive a Serialized Challenge Coin.

Thank you for any amount you can donate to help print 100,000 Bibles that will go directly to Military Chaplains for our brave Military men and women.